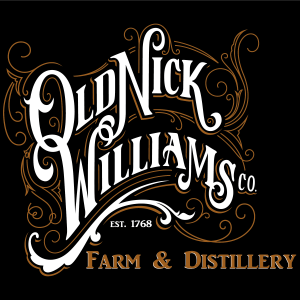 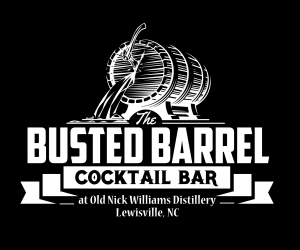 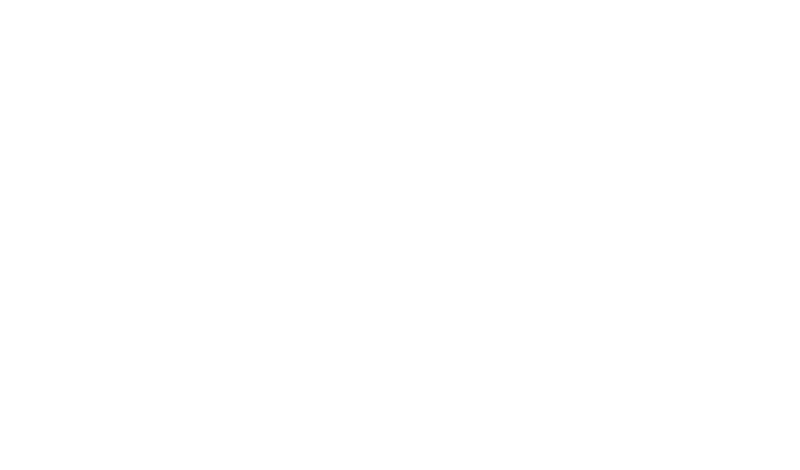 History has a way of repeating itself.

That’s what we’re counting on.

For over 250 years, the Williams Family has had a truly amazing and colorful journey. From participating in the Revolutionary War to establishing and then losing a world famous whiskey brand to prohibition, we invite you to take a ride with us down memory lane.

Nicholas Glen Williams brought world-wide attention to the ONW brand in the late 1800s and early 1900s. However, this story does not begin there. The story begins in a foreign land and moves to America, in a time when photographs were scarce, written records were few, and family history was passed from generation to generation by word of mouth. While we present these names, dates, and facts to you as truth, some may challenge them. Through the use of research, family Bibles, and reported tales, this is our story of our family’s history. 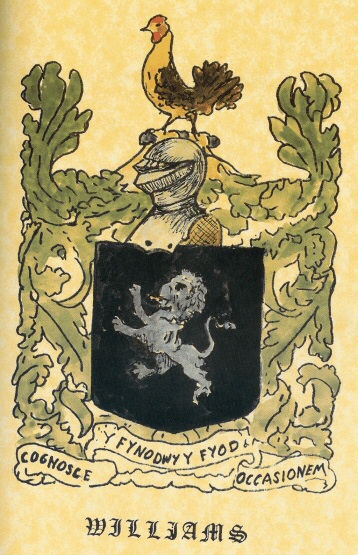 John Williams was born on January 26, 1679, in Llangollen, Wales. It is believed he traveled to America in the 1690s, first settling in Queen’s Creek in York County, Virginia. John married American-born Mary Keeling around 1701. Shortly after that, he and Mary relocated to Hanover County, Virginia. John was known as “The Wealthy Welshman”, and some historians report that he was involved in the distilling of whiskey. John and Mary had eight children. He died on September 6, 1755, after moving to the Province of North Carolina. 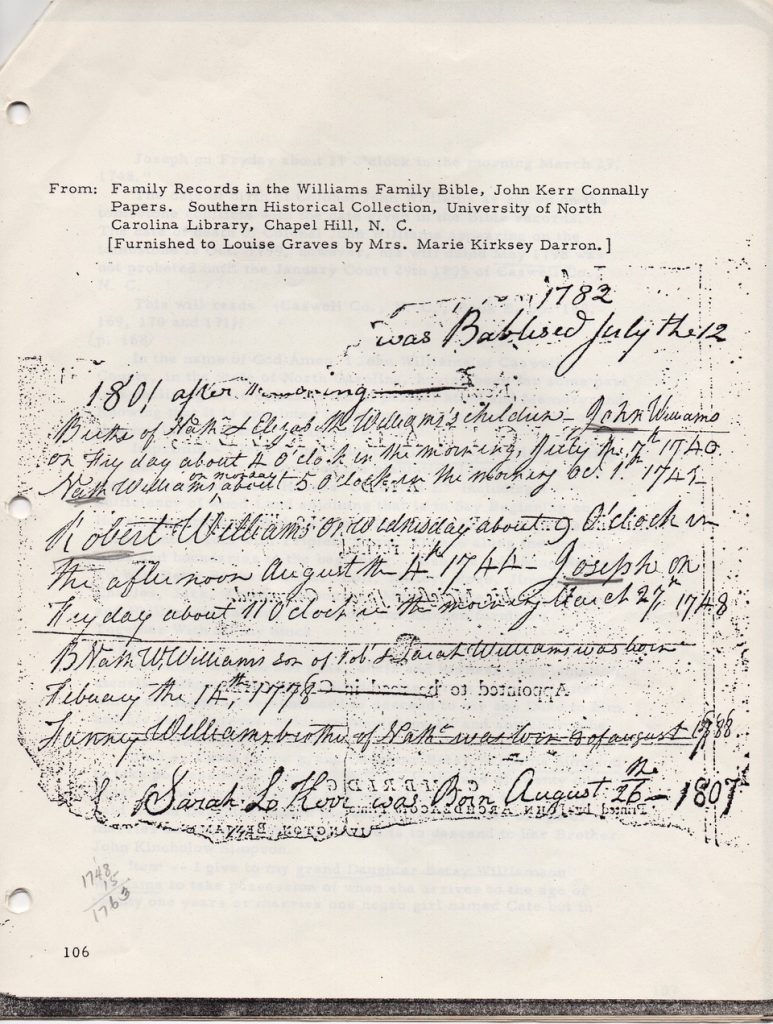 One of John’s sons, Nathaniel Williams, was born on December 2, 1712, in Hanover County, Virginia. He married Elizabeth Keeling, half-sister to the mother of George Washington on February 6, 1735. Together they produced four sons. Little is known of the life of Nathaniel Williams, and he is often referred to as “elusive”. Nathaniel Williams died in September 1766, in Granville, North Carolina. 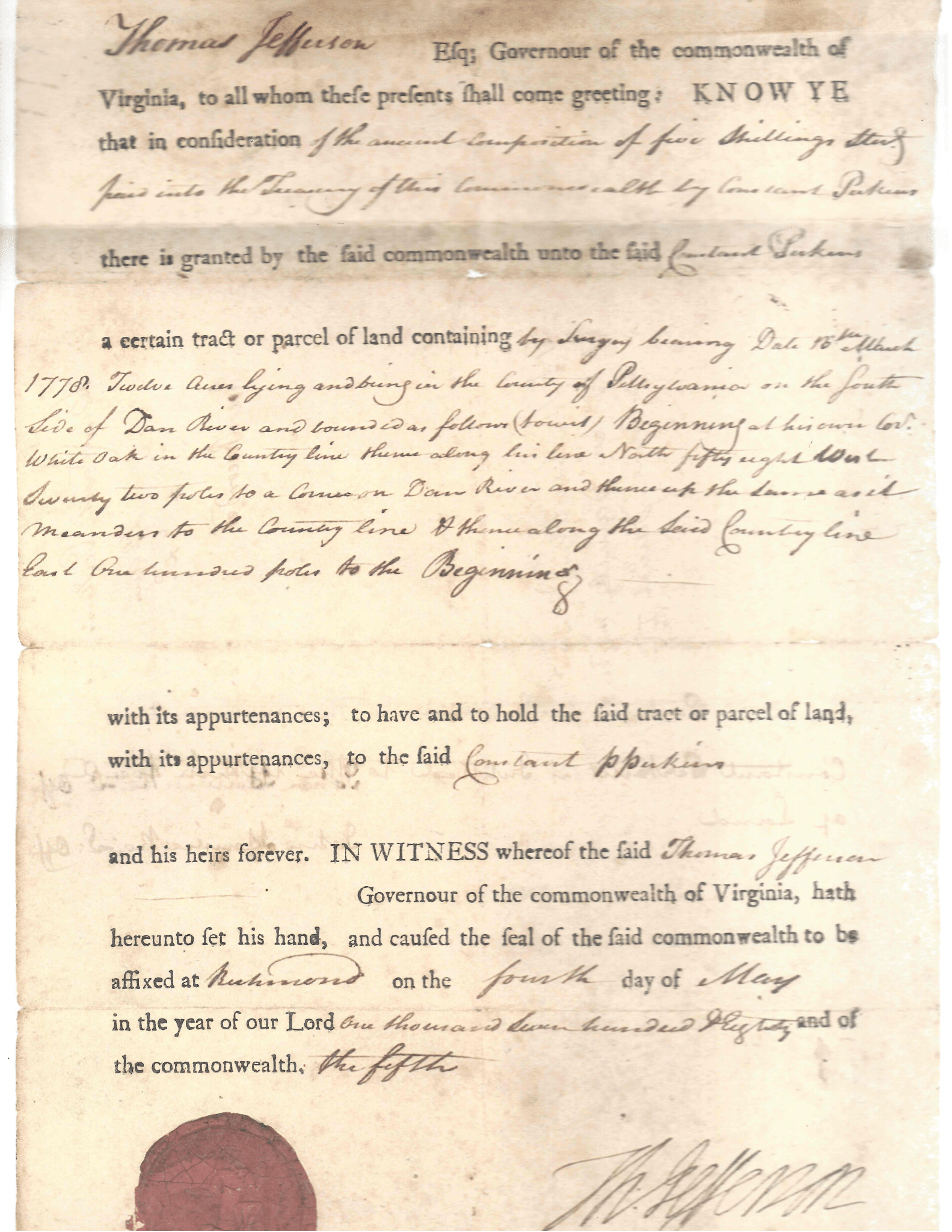 Joseph Williams was the fourth and youngest son of Nathaniel and Elizabeth Williams. He was born on March 27, 1748, in Hanover County, Virginia. In 1766, at the age of eighteen, he was given a land grant of 8,000 acres to relocate to the area where many of my family still live today. At the time, the area was identified as Rowan County, North Carolina. In 1770, it became part of the newly formed Surry County, and later became part of Yadkin County in the early 1850s. In 1927, Forsyth County paid $ 70,000 to obtain this area, which was referred to as “Little Yadkin”. Today, the former land grant is a part of Lewisville, North Carolina, in Forsyth County.

The Williams Distillery was established by Joseph Williams in 1768, after his relocation to North Carolina. The whiskey was used by Joseph and his friends and family for medicinal purposes and personal enjoyment, so it was important to Joseph that his whiskey be “the very best”. Word soon spread about the quality of the product and demand rapidly increased. On September 16, 1772, Joseph Williams married Rebekah Lanier. Following their marriage, Joseph built a home for his family with the distillery located nearby. 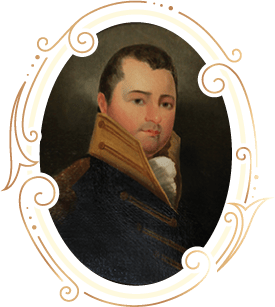 During the Revolutionary War, Joseph served in the army of Gen. George Washington. He rose to the rank of colonel and proudly served our newly formed country. He was revered as a military hero, and was from that time on, referred to as Col. Joseph Williams. He and his wife were the parents of twelve children. Col. Joseph Williams died on August 11, 1827, and was buried in the Panther Creek Cemetery, located near his residence. 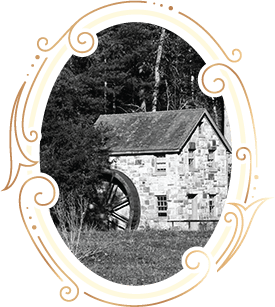 Nicholas Lanier Williams, the youngest child of Joseph and Rebekah, was born on February 4, 1800. He married Mary Graves Kerr on August 4, 1824, and they produced ten children, but only four lived to adulthood. Nicholas Lanier took over the distillery after his father’s death in 1827, and moved it from its original location to a new location along Panther Creek, about a mile from his father’s home. He built his home near the distillery, and in 1851, he built a larger two-story cabin close-by. This cabin still stands today, and is the residence of Nicholas Lanier’s great-great grandson.

Nicholas Lanier’s son, Joseph Williams, was born on January 7, 1836, and began working in the distillery with his father as soon as he was old enough to help. Joseph built a second two-story cabin, corner-to-corner with his father’s cabin. In February 1863, Joseph married Margaret Louisa (Lou) Glen, and records show they produced two children, a son and a daughter. Throughout this time, Nicholas Lanier and Joseph ran the distillery, named “Joseph Williams Distillery” together. It was Joseph who introduced a new brand of whiskey called “Old Nick”, in honor of his father. Nicholas Lanier Williams died on July 3, 1886. His son, Joseph, died sixteen months later on November 9, 1887. The distillery would pass to yet another generation.

Joseph’s son, Nicholas Glen Williams, commonly known as Glen Williams, was born on March 28, 1865. He married Mary Margaret Hollingsworth on May 20, 1896. They would continue to reside in the corner-to-corner log cabins built by his father and grandfather, adding rooms as necessary to accommodate their growing family. They would have thirteen children, although several of them died at birth or in childhood. 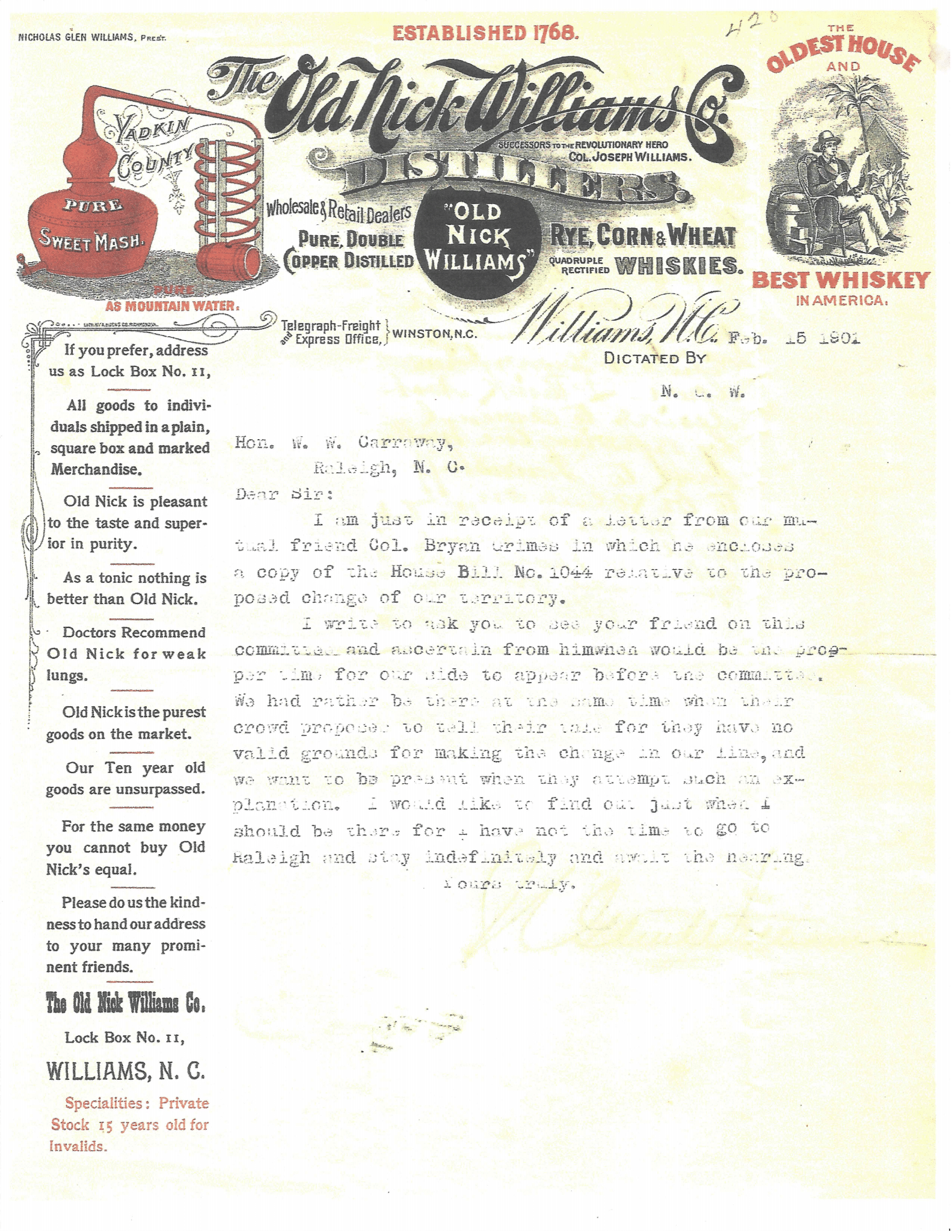 Upon the deaths of his grandfather and father, Glen took over the operation of the distillery. He soon realized the need for change. Within a short time he changed the name of the distillery to “Old Nick Williams Distillery” and began to enlarge the operation. Glen began buying additional raw whiskey from other local stills and aging and finishing it for distribution. He became well-known as a master of refining and rectifying raw whiskey. 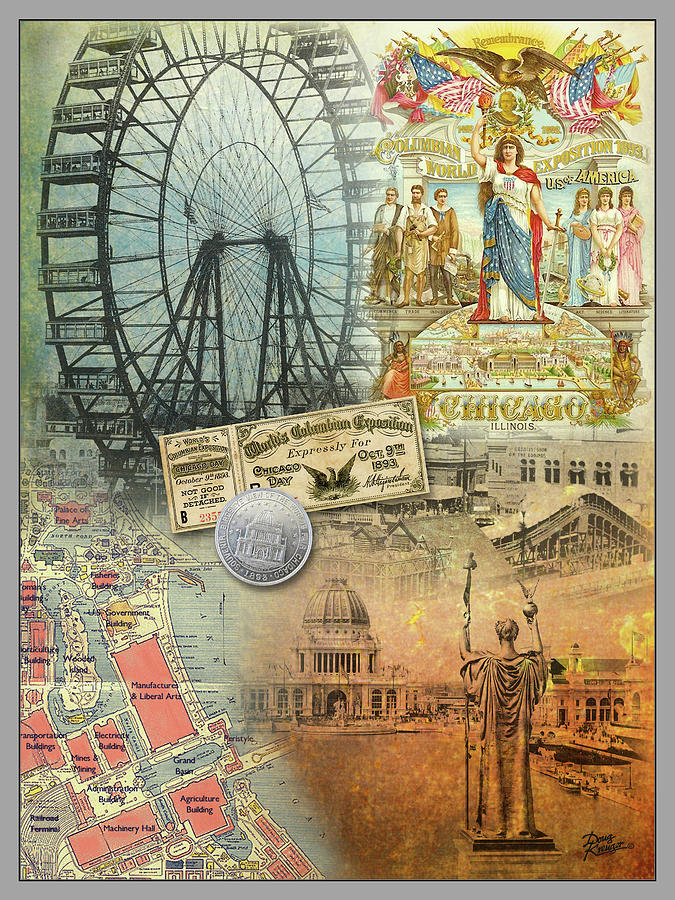 In 1893, the new brand was set up and advertised at the World’s Fair in Chicago. Seven years later, Glen was invited to set up at the Paris Exposition. This set the stage for world-wide distribution. Glen worked diligently to promote and establish the ONW brand. In 1902, when North Carolina passed a law requiring that whiskey be produced only in an incorporated town, Glen went to work to make Williams, North Carolina, an incorporated town. While he was not a large man, he had lots of determination and drive. He would not back down for a cause he believed in, and was called “Mr. Williams” by most people who knew him—not because he demanded it, but because he had their utmost respect.

The “Old Nick Williams Distillery” continued full operation until prohibition laws were enacted making it illegal to sell whiskey in North Carolina. They were then forced to distribute their products by shipping them out of state. This distribution continued until Glen Williams died on November 25, 1913. He left his widow with a 1,400 acre farm to operate, 28,000 gallons of the now “illegal” whiskey, and nine children to raise. The youngest child, Zebulon Vance Williams, was only 2½ years old at the time. After national prohibition was enacted, Glen’s widow had no choice but to destroy the remaining whiskey and shutdown the distillery.

After the repeal of prohibition and the conclusion of the Great Depression, several of Glen Williams’s sons made an attempt to reestablish “Old Nick Williams Distillery” in Virginia. A location was selected and efforts were made to secure funding. However, unable to secure the needed money, and unwilling to risk family land, the idea was abandoned after a short time.

Many years later, as the whiskey business was just a memory by friends and family, the Williams children played in the woods, collecting old bottles where the still site remains today. The home place of Nicholas Glen was to receive a major renovation. During the overhaul, an old safe was found underneath the stairs. In that safe was an abundant amount of documentation of the day-to-day operation of the distillery, including sales receipts from all over the world and thank you letters from key persons in Washington, D.C. As the excitement continued, a partial bottle of Private Stock Whiskey was found behind a plastered wall. These treasures just validated all of those stories passed down from previous generations. Now dreams of one day reestablishing Old Nick Williams Distillery grew stronger.

Years later, as the children grew to adults and the discussions of reestablishing the Old Nick Williams Distillery became more serious, the plan began to take shape. In 2014, two brothers, Van and John Williams, and their now grown sons, Zeb and Matt Williams, decided to move forward with their dreams. It is important to us that the facts of our family history are correctly presented to the public. We all share a common goal to bring back to the public the very best possible product, just as our ancestors did many years ago.

History is being made here. The story it continues to write is yet to be determined. But you can be certain that there are two generations of Williams men that are working extremely hard to “UNLOCK THE LEGEND!” 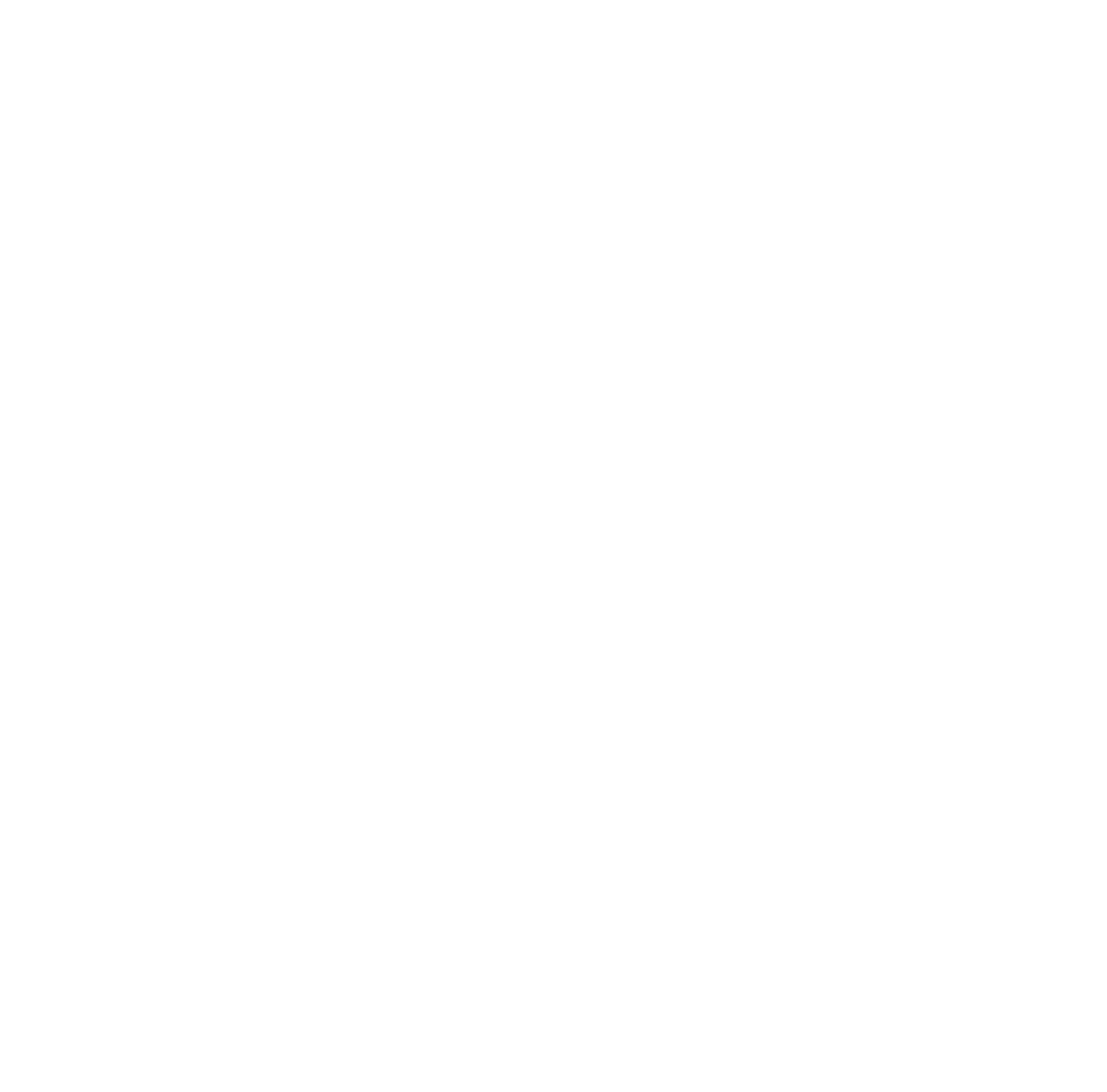 Get event notifications and discounts

Though it’s not mandatory, as part of our commitment to legal and safe consumption of alcohol, we require age confirmation.

Are you of legal drinking age in your location?